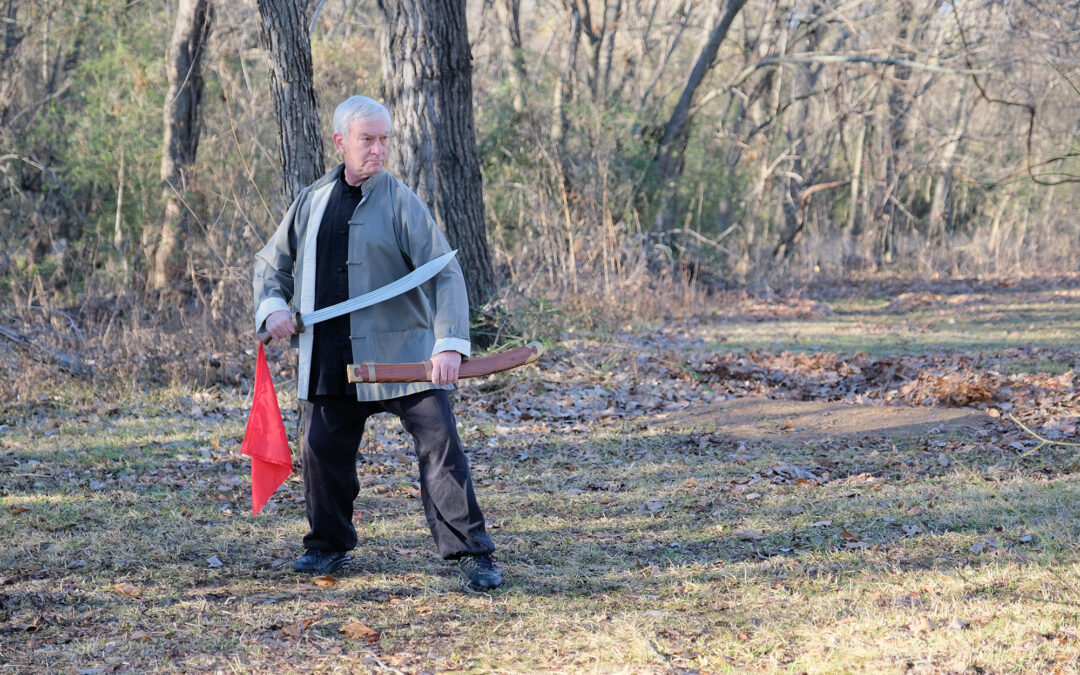 The sword is held close to my body by my rear hand. The front hand holds the sheath.  Dropping the sheath, the sword leaves my side as I make a horizontal slash at an imaginary opponent.  The sword completes the cut and turns so that the back of the blade hits my other shoulder.  It immediately rebounds; cutting along the same path it has just traveled.  Turning, I run as if in retreat, the sword again by my side.  Suddenly, I jump straight up into the air and spin, sending the sword out behind me but this time at head height.  Had there been an opponent pursuing me, he would have had only fractions of a second to see the attack, cease advancing and defend.

The routine I am practicing is called the Yan Qing Dan Dao.  Yan Qing was a character in the book Shuihu Zhuan (or Water Margin) written about the 14th century.  In the novel, Yan Qing is a tall, good-looking youth, whose body is covered with tattoos of bright flowers. He is a character of exceptional intelligence and cunning. The routine or Taolu bearing his name is one containing many deceptive movements and requires considerable agility.

The weapon is the Dan Dao, the single sword.  It is generally a one-handed weapon; the other hand is either empty or holds a shield. As the name implies, there is indeed a Shuang Dao or double broadsword where the warrior has a sword in each hand. The Dan Dao is considered a short weapon in the Chinese arsenal and is indeed short when compared to the much longer Qiang, (spear) or Kwan Dao, (halberd).

The term dao applies to all single-bladed implements. The knife usually found at the dinner table is a dao.  All Dan Dao share certain characteristics. First, they are either sharp on one side or sharp on both sides only near the point.  Second, (like many bladed weapons in the Chinese arsenal), the upper third of the blade is considerably sharper than the lower two.  Finally, near the blunt ridge on the back of the blade there are blood groves on both sides.

There are many different types of Dan Dao. They may differ by the shape of the blade, the shape of the handle and length while still adhering to the characteristics of the Dan Dao.  Some feature curved blades enabling deeper cutting action.  Some Dan Dao have curved handles facilitating greater maneuverability.

The Northern Chinese Dan Dao are often longer than Southern. They are also more likely to have curved blades and handles.

As mentioned, the Dan Dao was often used with a shield. This configuration was popular with infantry troops.  Many times, the shield was used as a weapon almost as much as the sword.  These Dan Dao troops were accompanied by spear wielding soldiers. They served as mutual defense; the spear engaged enemies at a safer distance but, if they got inside the reach of the spear, the swordsman would defend the spearman.

In other circumstances, the swordsman without the shield would put his empty hand on the back ridge of the blade and use it as a reinforced weapon; able to block a longer weapon and move quickly inside its reach to finish his opponent.

The swordsman could also block using the sword and grab the arm or weapon of the opponent with the empty hand. Thus immobilized, the opponent could be dispatched quickly with the sword.

Finally, the swordsman could block with the weapon and strike with the empty hand to vital areas.  Being injured, the opponent would be easier to finish if the strike itself did not end the fight.

When seeing a performance of the Dan Dao one will see the performer moving his empty hand in motions that “balance” the cutting motions of the sword.  These motions enable the practitioner to utilize both sets of intercostal muscles in his cuts.  It also conceals what would be the hand reaching for the hidden weapons, striking or grabbing.

With all these options it is no surprise that a well-known proverb among Chinese martial artists is “When fighting the Dan Dao, beware the empty hand!”